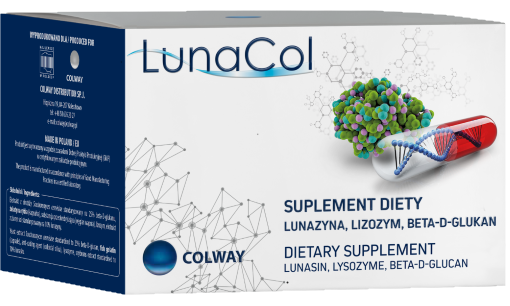 Studies have confirmed the anticancer properties of lunasin.

Lunasin is a vegetable-based peptide. It is the first and only known epigenetic food – it means it can influence the increase of gene activity and their qualitative progression. Lunasin has been carefully obtained from non-GMO organic soybeans. Lunasin is not responsible for allergic reactions caused by soy products. It also has no effect on the hormonal balance, as it is not associated with phytoestrogens in any way.

Lysozyme (also called muramidase) is a highly stable cationic protein. It is the slowest of the known enzymes, but it is also highly potent. It was first described by Alexander Fleming, who considered lysozyme (a basic factor in the innate immunity of all living organisms), not penicillin, as his greatest discovery. Its functions are still being discovered, and the most important of them is a strong bacteriostatic activity, which is particularly high when muramidase is combined with lactoferrin. The synergistic antibacterial effect of these two proteins was identified, among other things, in the milk of breastfeeding mothers and in tears.

Lysozyme is present in our digestive tract, which is safe for our body. Now that an increasing number of pathogenic strains have become resistant to antibiotics, lysozyme can be important for improving immunity.

Equally important are beta-glucans. They are the most vital component of dietary fiber. Beta-glucans strengthen the body’s first line of defense, the macrophages. They increase the activity of immune cells, increasing their ability to fight intruders. They also affect the rate of blood production in the bone marrow. In addition, they regulate the absorption of glucose, so that after a meal, blood sugar is better regulated.

Save this product for later
Display prices in: USD